NDE To Recruit 1850 Young Graduates for 3months Internship Programme: The National Directorate of Employment (NDE) on Friday informed that it is recruiting a total of 1,850 young graduates from the 36 states of the federation, including the Federal Capital Territory (FCT), for a three-month internship programme.

The graduates, according to the employment agency will be attached to the various places of work for the period of three months to acquire work experience.

These were revealed by the NDE Director-General, Dr Nasiru Ladan Argungu, in Bauchi at the training of 50 participants drawn from across Bauchi State.

According to Argungu, each state will produce 50 participants, adding that the interns will be paid a monthly stipend of N15, 000 for the three-month duration of their internship programme.

Argungu, who was represented by Idris Dauda Mahmud, further informed that each intern will be issued with certificate of participation after the training.

He added that they will from there be posted to various places of work.

“After their internship training, they will be recruited for work in various parts of Nigeria,” Argungu informed.

The internship training programme, Argungu stated, is designed by NDE to access participants with a view to giving them a second chance.

“During the service year, they only served but they are not opportune to be employed.

“If they prove themselves to be worthy of being employed, they will be retained in their various places of attachment,” the NDE boss said.

He said the programme is capable of reducing the rate of unemployment in the country. 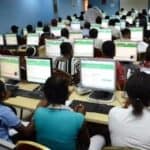