A lot of candidates have been asking Mediangr about the list of NCS comptrollers. Some of these questions are as highlighted below. The follow are some searches related to controllers customs service Nigeria;

This article will show you details on how to go about with the Nigeria Customs Service list of comptrollers and other important information.

What is now known as the Nigeria Customs Service – a paramilitary organisation, could be said to have been established a little over a century ago when the British Colonial administration appointed Mr. T. A. Wall, in 1891, as the Director-General of Customs for the collection of inland Revenue in Niger Coast Protectorate. This is the formalization of the duties which the Department had been performing under the Royal Niger Company under the leadership of the past Chief Executives.

The name Department of Customs and Excise emerged in 1922 when the first Comptroller of Customs and Excise, Federation of Nigeria was appointed. Towards the end of 1945, the Customs and Excise Preventive service was established under the leadership of Mr. Nicol – a Briton. This was made up of two divisions – Maritime and Preventive. The maritime Division has the responsibility of collecting import and excise duties and other related functions while the Preventive Division was responsible for enforcement duties which included prevention of smuggling as well as arrest and prosecution of smugglers.

Sequel to the promulgation of the Customs and Excise Management Act (CEMA) No. 55 of 1958 the affairs of the Department were brought under the management of a Board. The Chairman of the Board of Customs and Excise was made the Chief Executive Officer of the Department. Mr. E. P. C. Langdon, a Briton, was appointed the first Chairman and Chief Executive Officer in 1959. Mr. S. G. Quinton succeeded him.

The attainment of independence in 1960 led to the Federal Government’s Nigerianisation policy which brought about the appointment of the first Nigerian Chairman of the Board and Chief Executive Officer in the person of Mr. Ayodele Diyan in 1964. He died in 1968 and was succeeded by Mr. Henny Etim Duke.

Decree No. 7 of 1970 granted additional powers with the definition of the membership of the Board. Additional members were now to represent the Federal Ministries of Economic Development and Reconstruction, trade and Industries. The intention of this decree was to broaden the scope of the national interest which will make for better guidance in the Board’s decisions.

With the change of government in 1975 the three top management personnel were retired from the public service and the post of Chairman of the Board was abolished and replaced with that of Director. By virtue of Decree No. 41 of 28th August 1975, all the powers that were hitherto conferred on the Chairman and Deputy Chairman of the Board were vested in the Director of Customs and Excise and his deputies.

Hitherto, the Department was operating as two parallel Services – Revenue (Technical) and Preventive (Enforcement). This parallel method of running the two services created serious conflicts and immense administrative problems. This seriously affected the overall efficiency and attitude of officers and men with the attendant negative impact on the image of the Department.

Thus on the 1st April, 1977 the first major reorganisation of the department took place. The present unified service of the Department of Customs and Excise was the result. Precisely this means unifying the Technical and Preventive Services into one integrated service where officers and men are to serve in any of the two without hindrance. The unification structured the Department into five main Directorates viz:

Each Directorate was headed by a Deputy Director. The overall head was still the Director, Department of Customs and Excise and Chairman, Board of Customs and Excise. In addition, there were four divisions whose headship was drawn from the pool of the Public Service. These were Administrative, Legal; Finance/Accounts and Internal Audit. Mr. Oyebode Oyeleye was the first Director under this new arrangement.

The year 1985 witnessed yet another major structural change as the Department was removed from the Federal Ministry of Finance to Internal Affairs. This was sequel to government’s acceptance of the recommendations of the Study Group on Customs and Smuggling which was headed by Alhaji Yahaya Gusau. Thus, the Customs, Immigration and Prisons Services Board (CIPB) was created with the promulgation of Decree No. 14 of 11th January 1986.

This decree abolished the Board of Customs and Excise with this new Board taking over it’s functions and in addition absorbed the functions of the Federal Public Service Commission with regard to appointment, promotion and disciplinary control over staff of the Department.

The Honourable Minister of Federal Ministry of Internal affairs became the Chairman of the CIPB with the Director of Customs and his counterparts in immigration and Prisons Departments as members. Alhaji Abubakar Musa was the first director under this arrangement.

The CIPB embark upon an extensive re-organisation programme for the three Services in the Federal Ministry of internal Affairs–Customs, Immigration and Prisons. The most significant structural changes that gave birth to the present day Customs and Excise department took place on 16th February 1988 with the upgrading of the post of Director of Customs and excise from salary grade level 16 to salary grade level 17, the Deputy Director post was increased in number by one i.e. from five to six and the post up-graded from grade level 15 to 16. The functions of the Department were Assistant Directors was created on salary grade level 15. The functions of the Department were decentralised through Zonal commands to facilitate decision making process. Zonal Coordinators are to be in charge of the Zones while those in charge of states are to be known as Area Controllers. Dr. Bello Haliru Mohammed was the first Comptroller General under this arrangement.

In 1992 the Department of Customs and Excise was transferred back to the Federal Ministry of Finance and in addition its status as a para-military organisation was recognised. It has since been known as Nigeria Customs Service. There was an appropriate alignment of salary grade levels and a re-structuring with what obtains in the Nigeria Police Force.

With the change in Government on November 1993, the Federal Governmet set up the Major-General Paul Tarfa Panel to probe the activities of the Nigeria Customs Service. The Panel was given one year to conduct the probe and in the meantime a Sole Administrator in the person of Brigadier – General (later Major–General) S. O. G. Ango was appointed. However, he was in charge of the service until 4th Feb. 1999 when the Federal Government announced the appointment of Ahmed Aliyu Mustapha (OFR) a career Customs officer as the substantive Comptroller-General of Customs.

Alhaji Ahmed Aliyu Mustapha (OFR) assumed duties as the Comptroller-General of Customs on 4th February, 1999. Before then, he was the ACG (FATS) and later the Zonal Coordinator, Zone “C”, Bauchi.

A new board headed by the Honourable minister of Finance was also re constituted. The Comptroller-General was assisted by 6 Deputy-Comptrollers-General, heading the Departments viz:

The 6-zonal Administrative structure was also retained. Following the retirement of Ahmed Aliyu Mustapha as Controller-General of Customs on 31st December 2003, the Federal Government of Nigeria set up a Reform Committee headed by the Honourable Minister of state for finance, Mrs. Nenadi Esther Usman. The Committee recommended a fundamental re-structure of the Service to re-position it to meet increasing challenges. in the meantime, D A Ogungbemile, a Deputy Controller-General acted as Controller- General.

Consequent up on the acceptance of the Committee’s report, sweeping reforms were implemented including:

The Committee Found that the former structure was defective, requiring re-organisation to give the service better focus and direction. There was no economic justification for the existing 6 zonal structure. lt was therefore abrogated and replaced with only 4 zones, under which there were a total of only 25 Area Commands.

He in turn disengaged from Service on 17th August 2009, paving the way for the emergence of an Assistant Comptroller-General, Dikko Inde Abdullahi, who was appointed to replace him. Under Abdullahi, approval was given for a minor adjustment to the Service structure with the creation of an additional department, Human Resource, to be headed by a Deputy Comptroller-General. A new Command and Staff College, designated as a World Customs Organisation (WCO) Regional Training Centre, was established in Gwagwalada, Abuja to bridge skills gap in readiness of take-over of the Destination Inspection programme outsourced to Foreign Service Providers.

History was made on the 30th November 2013, when the Comptroller-General, Dikko Inde Abdullahi launched the Pre-Arrival Assessment Report (PAAR), signaling the official takeover of the scheme by the Nigeria Customs Service.

The Nigeria Customs Service is headed by the Comptroller-General and assisted by six (6) Deputy Comptrollers-Generals heading the departments as follows:

ACG (Headquarters) reports directly to the Comptroller-General along with the heads of some Special Units in addition to 4 Assistant-Comptroller-General (ACG) in the zones that coordinate the area commands under their respective jurisdictions.

The highest NCS rank is the Controller-General. Here is the list of Nigeria Custom Service ranks from the highest to lowest:

The current Comptroller-General of the Nigeria Custom service is Col. Hameed Ibrahim Ali (Rtd). He is responsible for the overall management and direction of the Service. He is equally the accounting officer of the service and the Vice Chairman of the Nigeria Customs Service Board, which is chaired by the Honourable Minister of Finance.

By virtue of delegated authority, the Comptroller-General is authorized to issue guidelines and prescribe internal instructions to Customs personnels in accordance with the governments rules and regulations as they affect the statutory functions of the Customs Service.

In the discharge of his duties, the Comptroller-General is assisted by six Deputy Comptrollers-General each heading a department.

When showing you the numbers of Nigeria Customs salary, we share the information based on several sources. These are estimates describing the average salary for different Nigeria Custom service ranks.

However, you should not expect such a high salary if you recently joined the organization. Officers of the lowest ranks (Customs inspectors) usually earn less than 30,000 Naira per month. Sometimes they can get an additional bonus of about 4,000 Naira as their rent subsidy, but this doesn’t always happen.

We have briefly described the Nigeria Custom service ranks and their salary to you. Now you have an idea of how much you are likely to earn if you choose to become a Customs officer in our country. 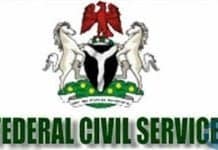 Loading...
Mediangr.com.ng is an independent digital newspaper organization focused on serving the Nigerian audience and the world at large with verified and undiluted news reports. Mediangr.com..ng Web Service is a non-governmental and non-political agency (private owned). Read more
Contact us: [email protected]

How to Apply Federal Ministry of Education Recruitment 2020/2021